I Have an Apartment!

You can't see me right now, but I am doing the SAK happy dance right now (yes, I am typing at the same time, I am just that multi-talented). I looked at a ton of apartments. A ton. They were tiny AND expensive. I am not trying to be picky for two months of subletting, but COME ON! I would like a distinct living room and kitchen if I am paying $650 a MONTH! Anyways, while I was at working, I was thinking about apartments. In fact, I gave up today and emailed this girl and said I would take her tiny apartment. Don't get me wrong, it is nice, but it is tiny for the amount of money I would be paying. HOWEVER, tonight, I looked at an apartment. What an apartment! It was a three bedroom, when I was expecting a two bedroom, but it was huge! There was a double parlor, a porch, parking, and big bedrooms. I can even move my stuff in early! It was also the cheapest place that I saw. I am so happy. One apartment down, one to go. Hurrah! Life is good. :)

In knitting news, my green lacey slanty scarf is over two feet long and the ball of yarn is shrinking! Check it out! 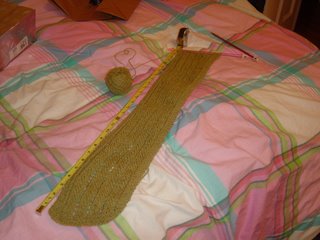 I am sort of embarrassed to say that the majority of this knitting happened at work. I recruit for a clinical research study and I spend the majority of my time sitting in a doctor's waiting room hoping that her patients will come in and I can screen them for the study. I used to read, but if I was tired, it was hard to concentrate on the words. With the knitting, I can keep going and the movement keeps me awake.

Alright, now that I have accomplished one huge step towards my future, I am going to get something to eat, watch an episode of Twin Peaks (from the second season, that's right, the one that you CANNOT get on DVD), and knit for a while. No, I am not going to eat and knit, I am not that multi-talented. ;)

-SAK
Posted by silverarrowknits at 7:41 PM