On vacation, I knit a grand total of one washcloth. It is a bit embarrassing. I got too wrapped up in reading. I
have a stack of books that need to be read within the next month. Once I got home though, I returned to my Amy Pond Scarf. I am about 40% done with it! 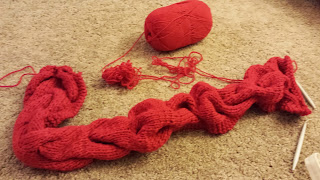 I have been continuing to knit while rewatching all of the Star Wars movies. My husband and I finished up with episode 3 last night. I think he is tired of hearing me complain about the Jedi and their bottling up of emotions. I have also been watching the first season of Carnivale. It is a really interesting show so far. The show follows a carnivale show and a preacher. There appears to be magic in this world, that may be related to God and the Devil. There is an air of mystery surrounding everyone, and the show does a good job of balancing giving the audience a bone and teasing of new mysteries.
Posted by silverarrowknits at 5:25 PM