Birthday weekend is almost here! My birthday is tomorrow, and I am quite excited. I am getting Forbidden Desert, and my husband and I are going to play lots and lots of games. If you are looking for fun cooperative games, Forbidden Island, Pandemic, and Elder Sign are some great choices. Also, if you are interested in trying new board games, but you feel uncertain about where to start (the back of the box doesn't always sell a game), try Wil Wheaton's YouTube series "TableTop" on the Geek & Sundry channel. The shows are about 20-30 minutes and consist of Wil and his friends playing board games. The show won the Diana Jones Excellence in Gaming Award.

Here are some of my favorite episodes:

Pandemic
Elder Sign
Ticket to Ride
Formula D (I even watched the extended edition, because I found the original episode to be so funny.) 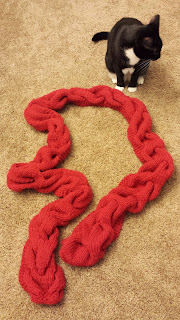 I finished the Amy Pond Scarf! Hurray! I was started to get tired of it, so I ran out of yarn at the perfect time. There is supposed to be some fringe, but I really dislike fringe, so no fringe for you! I am really happy about how it turned out. Plus, I used five balls of yarn! Just call me Stash Buster. ;)

I am now working on a Who? hat for my husband's birthday (he's is next week). His college's mascot was an owl, so I thought this hat would be perfect for him. It will also match the Owling fingerless mittens that I knit for him last year. I just have an inch more of stockinette and then I can start the decreases. I would be done already, but I can't work on it when he is home. I am a little worried that it won't fit, but I told him that I will knit him a larger hat and I will keep this one!

Kitty wanted to help with the pictures! 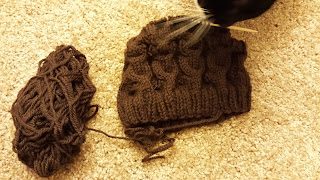 I watched Katy Perry: Part of Me this week. It was a pretty good documentary, even if it is a bit unbalanced with its totally pro-Katy Perry attitude. It was nice to see that she has a good relationship with her family and that her staff seem to like her. Also, there is a good amount of seeing her onstage seeing on her concerts. I am a Katy Perry fan, and I like listening to her songs. My husband and I both had the same thought during the documentary: You won't find Katy Perry twerking even though several of her songs have sexual metaphors.
Posted by silverarrowknits at 4:50 PM