Well I had a very wild and exciting weekend; and by wild and exciting, I mean a weekend filled with movies and knitting. :) The knitting I will discuss below, but let's discuss other knitting related business now! First, I am trying to reorganize my knitting book library. I am attempting to add all my books to ravelry. It is a slow and arduous process, because I want all the books tagged and listed as either dead tree editions or ebooks, so I can find them easily. I have gotten to the point that I own so many knitting books that I don't remember what books I have. I feel rather embarrassed when I come home from the library with a stack of books that I already own. I am about a third of the way through the books then I get to do all the knitting magazines! Yea!

Second, I randomly volunteered to teach a woman how to knit when I was at Barnes and Noble. The cashier commented that she always wanted to learn how to knit when I was buying a knitting magazine (The Unofficial Harry Potter Knits magazine that Interweave just put out), and I told her about the knitting group that I started going to instead of just telling her to buy Stitch 'n Bitch by Debbie Stoller, which is how I learned to knit. I don't know why I said this, because I find teaching people to knit to be tedious. At the same time, I have taught several people how to knit, and I find it satisfying to see them finish projects on their own. I guess I will see, if she comes. I will have to dig out some yarn and needles just in case. 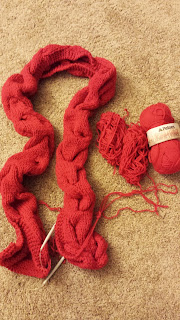 I am still working on the Amy Pond Scarf. It is definitely getting longer. It doesn't look very long in the picture, but I can wrap it around my neck at least once. I have one full ball left to knit and a little bit of two others. If I keep up my current pace, I should be done this week. Yea! I am really enjoying knitting this scar, because it requires very little brain power. There is only one row that is a bit fiddly (the cable row) and the rest is mindless. Granted, I have lost count a few times, so some of the pattern repeats are a bit longer than others, but you can't tell unless you are examining the scarf carefully.

I think I am going to knit a hat for my husband next, because his birthday is coming up! I think he could use something warm, since the weather is starting to get a bit chillier. Also, his mother is a knitter, and I am worried that she might think I am not doing right by her son, if he is not outfitted in knitted items from head to foot!

This was a big television weekend for my husband and me. We watched the PAX D&D game and The Music Man. I was able to knit almost half of my scarf during the five hours of television. Both of these shows focus on the speaking and singing bits, so I could really focus on my knitting and only look up from time to time (knitting for the win!).
Posted by silverarrowknits at 10:00 AM