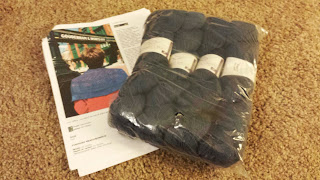 Hello! I great you from the other side of 32! I had a fun birthday on Saturday, and I received some beautiful yarn for the Bigger on the Inside shawl. My mother-in-law got me the Lorna's Laces yarn, and it is gorgeous! I can't wait to start knitting it. I also received Forbidden Desert, but we had a wee setback, because the game was missing a piece. We made due over the weekend, and on Monday, I was able to get in contact with the company. They are going to send me the piece in the new week or so.

I have been knitting up a storm this week. I finished my husband's Who? hat for his birthday. He liked it. :) I was worried that it wasn't going to fit; however, he said that if anything it was a bit loose. I am going to have to make him some more hats and figure out the right number of stitches for him. He says that he has a huge head, but I am starting to think that it isn't as big as he thinks it is.

I also started a Noro Striped Scarf with Knit Picks Chroma yarn. It is a fairly mindless project, so I knit it while watching television or at my knitting group. I am already starting to get a bit tired of knitting it (I get bored quickly with scarves); however, I keep telling myself that I am only going to knit two balls and then I will be done! We shall see how long that lasts.

Finally, I have discovered the world of ruffle scarves. I thought I knew what ruffle scarves were; however, I was knitting a poor man's cousin of the ruffle scarf. The ruffle scarf I previously attempted to knit had wrap around stitches and lots of turning. This new scarf only requires that I knit four stitches and the yarn does the work. After I knit one Sunday night, I went back to Michael's and bought more yarn, because it was on sale. I didn't tell my husband how many balls I bought. My plan is to just pull out a new ball every night (starting with last night) and just knit it until he asks how many balls I bought. There are several ruffle scarf patterns on ravelry. I am using the Patons pattern. I recommend using the below youtube video to understand what you are doing, because the directions are a bit sparse. 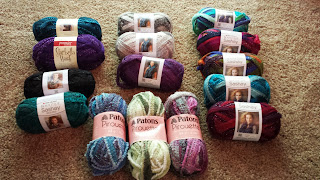 My husband and I are doing a rewatch of the new Doctor Who. The latest season of DW was not its strongest, so we are trying to rekindle our DW love. It is great rewatching shows, because I can focus on my knitting, but I can look up fairly often and catch things that I never noticed in my original watching.
Posted by silverarrowknits at 1:16 PM