Well, things have been far less exciting, since the birthday extravaganza has ended. My husband liked his birthday hat, and his mom approved. :) Hurray! Otherwise, it has been pretty quiet here. I have been doing a lot of reading and working.

I finished Ruffle Scarf #2, and I seemed to have fallen off the ruffle scarf bandwagon. Because the stitches are so large, they slip off the needles very easily; therefore, I end up losing chunks of knitting all the time. The scarf is much easier to knit, if I know I have a few hours to just sit and knit. It really is a knit in one sitting type of project.

I have also been knitting my Noro Striped Scarf. It is a bit longer, but it is a slow and
steady wins the race type of project. I am almost up to a full rainbow repeat of my yarn. I think I am almost up to two feet. Hurray! I should measure my old chroma scarf, and see how much longer I have to knit.

Finally, I knit Lunabelle a cute bird catnip toy. She doesn't find it too interesting; however, she sometimes falls in love with a toy six months after she receives it. I messed up picking up the stitches around the head, so it looks like the bird has a collar. One bonus about this project is that there is no seaming. It is knit in one piece (you pick up stitches around the neck to knit the head). 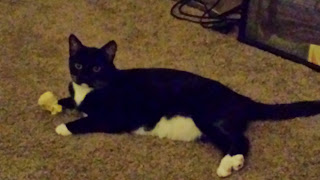 
Posted by silverarrowknits at 10:13 PM