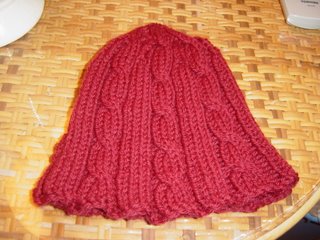 I am on a roll! I just finished my Cable and Rib Cap. I was almost done last night, but I messed up on a stitch and I couldn't seem to figure out what I did. I had three stitches attached to one another instead of one. I gave up at 1AM and today, my co-worker E fixed it in ten seconds. It was amazing. I did the last ten rounds when I came home tonight. The weather is really crummy here in Providence, so I keep working on wool hats and scarves. I don't think the weather is going to break.

In fact, as soon as the cap left my needles, I 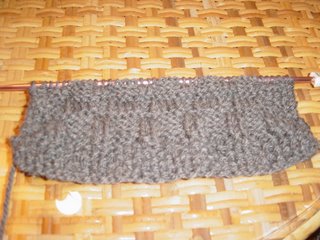 started back up on the textured scarf. I like working on it since I use straight needles and they are easier for me to hold than the circular needles. I really like making hats and other tubular objects, but those tiny needles really hurt my hands after knitting for a while. I think this is one of the reasons that I am not jumping on the sock bandwagon. I guess it is more fun fur scarves for me! 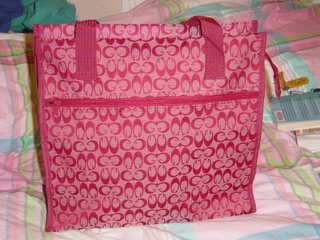 Oh! I forgot to mention that I got a fabulous knitting bag on Wednesday. The bag is the perfect size for two small projects or one medium sized project. It is a Coach knockoff. How can you tell it is a fake? If you take on peak inside, the lining is horrific and there is a "Made in China" tag in it. Also, there aren't C's on the outside of the bad but G's instead.

I talked with my parents about my moving to Florida in the end of July/beginning of August. The current plan is that my entire family (mom, dad, and brother) are going to drive my little Honda Civic to Florida. We are going to get a little trailer and and attach a hitch to my car. Now, I am a little nervous about the four of us being squished into my car with all of my stuff (and my family's suitcases), but there is valuable knitting time to be had! The previous plan involved me driving and as much as I do like to drive my car, I wasn't really looking forward to driving on the George Washington bridge. Now my dad is going to drive and I am going to be knitting all the way down! I am just trying to find a way to convince my parents that all of our rest stops should be near yarn stores. This seems doable, right?

PS The Grafton, MA book signing worked out! Come April 21st, I am going to have a picture of me and the Yarn Harlot! ::Happy Sigh::

Knitting Television:
The Sopranos (Season One)
Sex & the City
The Tonight Show (Leno)
The Late Show (Conan)
Posted by silverarrowknits at 9:42 PM